Recently I was playing with stencils.

I had a really cool scissor stencil I got a Picture to Page show a year ago. I had failed to open it up and use it. Well, I couldn't have that any longer.

Now, the ink I have failed to write down but I think it was Abandoned Coral. 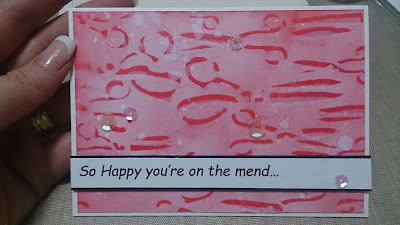 I put a layer of abandoned coral over the cardstock and then put the stencil on and sponge through that. I have heard alot about using a white pigment ink over the top of an image but with it moved slightly to give you the look of another shade of ink.

Now you do need to use a clean sponge for this and clean it off after as the distress ink, of course, re-activates. Splash abit of water and add some sequins.... Done!

I don't have a great photo of this as I had no idea what I was going to do with it. Then suddenly my boss was ill and she loves sewing.... So off it went before I could get the best photo! :(

I used my computer to generate the sentiment so it fitted the theme. I think the computer is a tool that often gets forgotten.

Thanks for stopping by.
Posted by Natalie Walsh at Sunday, July 17, 2016